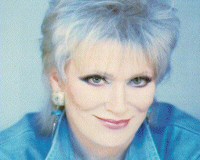 This is the house that Dusty bought in 1968.

Description: This is where the late pop icon Dusty Springfield lived from 1968 to 1972.

The singer was known as the white Queen of Soul, and was most famous for her 1960s hits Son of A Preacher Man, I Only Want To Be With You and You Don't Have To Say You Love Me.

Her beehive hairdo and panda eye make-up made her instantly recognisable in both the UK and US where she had a string of top ten hits.

Her first single success came in 1964 with I Only Want To Be With You when, with bands like the Beatles and Rolling Stones, she formed the vanguard of the British invasion of the US pop charts.

Her career lulled in the 1970s, but she reinvented herself in the 1980s with collaborations with the Pet Shop Boys on the single What Have I Done To Deserve This?

She was assured rock immortality when in 1998 she was inducted into the Rock and Roll Hall of Fame. Her album Dusty in Memphis was entered into the Grammy Hall of Fame for records earlier this year.

Moz and the Suedehead House», 2.3km