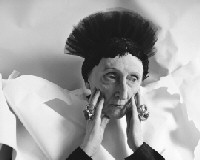 The great grandmother of rap lived and performed here!

Description: Rap music was invented in England by Dame Edith Sitwell in 1922 when, perched atop a stepladder, she recited the poems of Facade through a megaphone over the musical accompaniment of her homeboy Sir William Walton.

Wikipedia states that rap music began in the Bronx during the late 70s, when performers began rhyming over repetitive beats. Grandmaster Flash and the Sugarhill Gang are generally credited as the avatars, with The Message and Rapper's Delight.

Of course, its origins can be traced further back - 50s Beat Poetry over jazz, Jamaican dancehall toasting, Gil Scott-Heron and the Last Poets. There's even a suggestion that Wink Martindale's A Deck of Cards is a rap record ... really.

However, it seems to have escaped rap historians' attention that Facade - first performed privately in 1922 here, and subsequently at The Aeolian Hall in 1923 - is the first example of rapping. What's more, Sitwell's robed, bejewelled appearance was so eccentric that she makes Flavour Flav look like Val Doonican.

1» For your information; it is not Carlisle Square but Carlyles Square. In 1872 Oakley Square was renamed in honour of a Scottish historian and writer Thomas CARLYLE. It is also worth noticing it was named after him during his lifetime in 1872. He lived with his wife Jane in Cheyne Row and his house (National Trust property) is still there. Regards Nika Garrett (Nika Garrett)
Posted by Nika Garrett on 2012-02-07