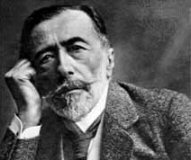 Description: The novelist Joseph Conrad (1857-1924) was born in Poland but moved to Britain early in life and adopted it as his own country. He loved living at the heart of London, drawing inspiration and strength from the cosmopolitan energy of the city.

Conrad wrote a huge amount of novels and novellas but probably his most famous and controversial work was The Heart of Darkness.

In 1896, he married an Englishwoman (Jessie George) and spent most of the remainder of his life in Kent. He is buried in Canterbury.

A meeting of Literary Minds», 2.3km