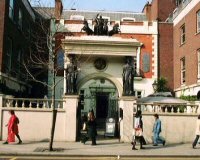 3» 1969-1972, I was the drummer in the original Heatwave group and we played The Pheasantry Club, with Alex as DJ, almost every month. http://www.heatwave.n.nu (Martin Samuel)
Posted by Martin Samuel on 2012-04-12
2» Jonathan Routh, the hero of Candid Camera, lived here in the 1950s when he first married. I often visited the Rouths at that time. (Richard Lubbock)
Posted by Richard Lubbock on 2010-09-26
1» My mother was a cleaner here when sterling (cant remember other name) owned it - approximately 42yrs ago - my mother still talks about these times - she is 83 and very active and came from down the Kings Road, Chelsea Manor Street - very interesting to hear all about the kings road at that time (shirley Ryan)
Posted by shirley Ryan on 2008-07-18

The Palace of Westminster», 355km

The Nose in Admiralty Arch», 2.0km