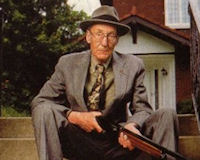 Chaucer Lived Over the Aldgate», 2.6km