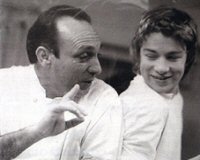 This is where Jamie Oliver's fave Italian is.

Description: This is the Italian restaurant part-owned and run by Gennaro Contaldo, Jamie Oliver's favourite Italian chef and has appeared on several of Jamie's shows. Most recently he helped Jamie (by letting him stand on his shoulders) to cut down a Chicken of the Wood fungus on Jamie At Home.

The author of several authentic rustic Italian cookbooks has a long friendship with Jamie, and this restaurant is renowned in London.

Contaldo grew up in the small village of Minori on the Amalfi Coast, developing his love for food from days he spent hunting with his father and grandfather, and collecting herbs for his mother. He began working in local restaurants at age 8. He left Italy in 1969 for London, briefly establishing an Italian antiques business, before returning to cooking.

Scandinavian Food for All», 0.2km