Start of The Getaway Video Game 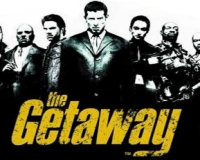 This is the scene of the intro to The Getaway video game.

Description: This is where the famous intro of the 2002 Playstation computer video game The Getaway starts. The first scene in story mode.

The first half of the game follows Mark Hammond, a Retired Member of the Soho-Based Collins Crew, an organised crime mob lead by Nick Collins, who was recently released from prison and has settled down with his Wife, Susie and their Son, Alex.

One day, Hammond awakes to find his wife murdered and son kidnapped by members for a gang known as the Bethnal Green Mob. Rushing to his family's aid, he picks up the Murder Weapon (incriminating himself - for the rest of the game, the Police Suspect that Mark is responsible for the murder of his wife) and witnesses his son being forcefully dragged into a nearby car.

Consumed with rage, Hammond frantically tails the car from here to a warehouse where he is ambushed by Charlie Jolson (played by Ricky Hards), leader of the Bethnal Green boys, who is holding Hammond's son hostage.