The Magpie and Stump 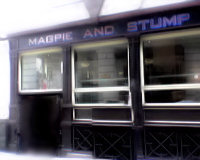 The pub where Hanging Breakfast's were order of the day.

Up until public hangings were abolished in 1868, the upstairs rooms used to be rented out on public holidays so as to provide the wealthy with a prime vantage point of the gallows. The speciality for these events was a 'hanging breakfast'!

In 1868, Michael Barrett was the last person to be executed publicly.

In the 17th century the Magpie and Stump housed one of the 'clubs' known as mughouses, so called because every man had his own mug.

The last woman to be hanged in public was serial killer Catherine Wilson who was hung outside here before an incredible crowd of 20,000 on 20th October 1862.

Rule Brittania in The Dove», 6.0km