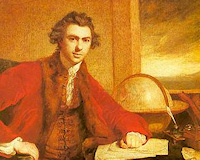 This is where famous botanist and explorer Banks lived

Description: Sir Joseph Banks was a great British explorer and naturalist; as a long-time President of the Royal Society he steered the course of British science for the first part of the nineteenth century.

His home here, with its unrivalled collection of plants and books, became one of the scientific and social centres of Georgian London.

His unique collections, energy and knowledge put him at the heart of Georgian scientific and social life for over five decades. His house (and the extra buildings behind it) were open to anyone, on introduction, who wished to examine his plants and books.

One voyage he helped arrange was William Bligh's infamous trip on HMS Bounty, now better known for its mutiny. Bligh's mission had been to collect breadfruit from Tahiti for cultivation as a food source in the West Indies. By transplanting species between countries and continents, Banks changed entire landscapes.

Banks's famous plant collection is now held at the Museum, along with insects and shells that he acquired throughout his life. These are all still valued research tools, as well as important historical artefacts.