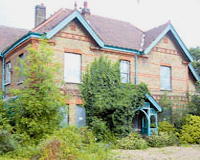 This is where Inspector Morse's house in Oxford actually was!

Description: This is where Oxford TV detective Inspector Morse lived. Suprise, suprise, it's not in Oxford. The house was built in the 19th century and used to be owned by Queen Victoria's father The Duke of Kent.

In 2009 it hit the papers when squatters moved in, wrecked the place, and it got boarded up.

The TV show ran from 1987 to 2000 and starred John Thaw often appearing and disappearing from here in his vintage Jaguar.