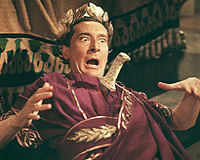 This is where Carry On star Kenneth Williams lived as a boy.

Description: This is the site of the late actor and comedian Kenneth Williams's father's barber shop. The Carry On movie star, who died aged 62 in 1988, lived here between 1935 and 1956.

The blue plaque was unveiled here in October 2009 by actors Leslie Phillips and Bill Pertwee and radio presenter Nicholas Parsons.

Williams began his career in 1948 with theatre roles before being cast in the BBC radio series Hancock's Half Hour.

He went on to perform in numerous radio and TV shows including Round The Horne and Just a Minute, as well as starring in the Carry On movie series.

Williams lived in a flat above the Marchmont Street shop with his father Charles Williams and mother Louisa.

The Goons and Finnegan», 1.9km