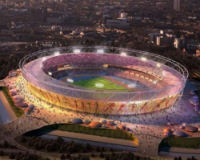 The main Olympic Stadium for the 2012 London Olympics.

Description: The London Olympic Stadium will be the centrepiece of the 2012 Summer Olympics. The stadium will have an 80,000 capacity making it temporarily the third-largest stadium in Britain behind Wembley Stadium and Twickenham Stadium. Land preparation for the stadium began in mid-2007, with the official construction start date on 22 May 2008, although piling works for the foundation unofficially began 4 weeks ahead of that date.

The design features a stadium bowl holding the 25,000 permanent seats, surrounded by 55,000 demountable seats that will taken away after the Games.

After the Games, it will be transformed into a 25,000 capacity Athletics stadium and will host a variety of sporting, educational, cultural and community events. It will be a sustainable and vibrant facility, attracting other businesses and investment and acting as a hub for the communities living in and around the Olympic Park. 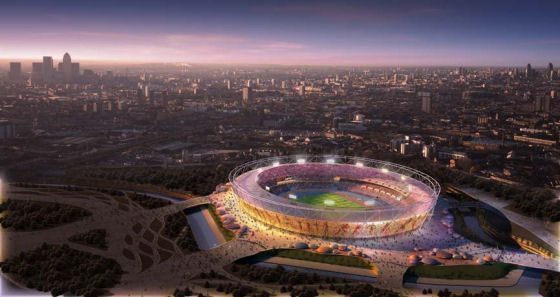