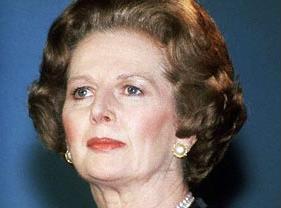 Description: This was once a Eighties-themed club inspired by Margaret Thatcher.

Once called 'Maggie's' in Chelsea, the former prime minister glareg at patrons from black-and-white photos on the stairs, her face is the main subject of a mural on the wall, and her most famous speeches are broadcast in the lavatories.

Charlie Gilkes and Duncan Stirling chose Thatcher as one of the most enduring figures of the decade.

Maggie memorabilia competes for space with other Eighties artefacts at the 150-capacity underground bar in Fulham Road.

Memorabilia includes giant Rubik's Cube tables, a Beano collage on the wall, and a cocktail menu which can be read through View-Masters. Display cases are full of everything from A-Team figures to A-ha platinum discs.