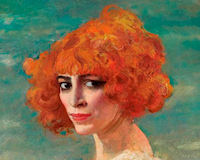 Description: Luisa Casati (1881-1957) was an Italian heiress, muse, and patroness of the arts in early 20th-century Europe known for her eccentricities - she really was the Lady Gaga of her day. Her most famous quote is I want to be a living work of art.

In 1910, Casati took up residence at the splendidly opulent Palazzo Venier dei Leoni on the Grand Canal in Venice (now the home of the Peggy Guggenheim Collection). Her soires there would become stuff of legend, along with her eccentric menagerie of exotic animals. She astonished society by parading with a pair of leashed cheetahs and wearing live snakes as jewellery.

She posed for portraits and sculptures by artists as various as Giovanni Boldini, Paolo Troubetzkoy, Romaine Brooks (with whom she had an affair), Cecil Beaton, Kees van Dongen, and Man Ray. She commissioned many of them herself, as a wish to commission her own immortality.

However, by 1930 Casati had amassed a massive personal debt of more than $25 million and had to auction off her personal possessions. Designer Coco Chanel was reportedly one of the bidders. Casati fled to London for a fresh start where she lived in comparative poverty in a one-room flat.

On 1 June 1957, Marchesa Casati died of a stroke at her last residence here at 32 Beaufort Gardens in Knightsbridge, aged 76.

She was buried wearing her black and leopard skin finery and a pair of false eyelashes. She was also interred with one of her beloved stuffed pekinese dogs.