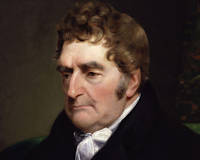 This is where Joseph Nollekins lived and sculpted.

Description: Joseph Nollekens (1737-1823) was a London-born sculptor who trained in Rome and Antwerp, before returning to become one of Britain's finest sculptors.

On his return to London in 1770 he set up as a maker of busts and monuments here (formerly called number 9 Mortimer Street) where he built up a large practice.

He enjoyed the patronage of King George III and numerous statesmen, became a revered member of the Royal Academy in 1771, and racked up a fortune by the time he died in this house here.

However, 5 years after his death, his reputation was tarnished by a colourful biography by John Thomas Smith portraying him a grotesque miser.

Emblem of the Cockney World», 2.2km