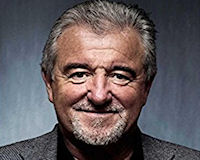 This is the childhood home of Terry Venables.

Description: The future England manager Terry Venables was born nearby in Valence Avenue, soon moving out in the Blitz, to be nearer his father's family. This is where he grew up.

When he was 13, his parents moved to run a pub in Romford, Essex, leaving him to stay with his grandparents, who fostered his love of football.

He attended nearby Valence and Lymington Schools and captained the Dagenham Boys football team, playing regularly in Valence Park. In his autobiography, he said I do not really think I could have been brought up anywhere better.

His managerial career began at Crystal Palace in 1976 and has taken him to clubs including QPR, Tottenham and Barcelona.

As England Manager from 1994 to 1996 he led the team to the semi-final of Euro 96, where they lost to Germany on penalties.

Superhoops in the Bush», 15.km