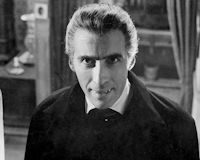 Description: This was the home of great horror film icon Sir Christopher Lee (1922-2015).

Lee became famous for portraying villains and was best known for his role as Count Dracula in a sequence of Hammer Horror films.

After a few years living in California he moved back to England and lived here until his death, you can see the home briefly in his music video accompanying his cover of My Way from his album Revelation.