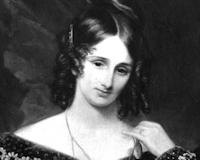 The place where the pioneer of gothic fiction lived and died.

Description: Today 7-9 Buckingham Gate are grand houses opposite the Palace designed by architect Sir James Pennethorne (student of John Nash) and the man who designed the south wing of Buckingham Palace. Today they are hugely sought-after residences, but prior to 1859 they formed Stafford Row, tired old houses.

In the year 1767, engraver William Wynne Ryland, lived here. He was executed for forgery in 1783.

The gothic fiction pioneer Ann Radcliffe (think classy Scooby Doo endings!) lived here until her death here. She authored The Romance of the Forest, The Italian, and The Mysteries of Udolpho. She was an animal lover and often took in stray dogs and nutrured them back to good health. She was well-acquainted with the royal princesses who also walked dogs from the palace.

Richard Yates, the actor, who was famous in the last century for his delineation of old men died strangely here in 1796. Peter Cunningham (the Hand-book of London) stated Yates had ordered eels for dinner, and died the same day of rage and disappointment, because his housekeeper was unable to obtain them. A few months later, the actor's great-nephew also died oddly here being shot as he left the house by a stray bullet.

A meeting of Literary Minds», 1.9km