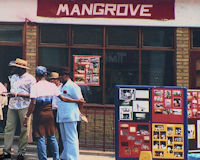 The location of the Mangrove restaurant.

The police, however, looked with suspicion and directed a campaign of harassment, raiding the restaurant on 12 occasions between January 1969 and July 1970.

Patrons convened the Action Committee for the Defence of the Mangrove, including Crichlow and barrister Anthony Mohipp (secretary of the Black Improvement Organization).

On August 9th 1970, they organised a 150-strong march to the local police station, only to be met by the Met Polices new unit Black Power Desk. Infamous clashes followed.

Initially the case was thrown out, but, in an unorthodox move, the director of public prosecutions reinstated the charges. The nine were rearrested in dawn raids and the trial lasted 55 days but all nine were acquitted of the most serious charges.

A Collection of Celebs», 2.1km