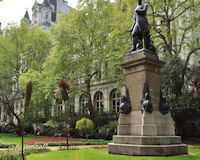 Description: Whitehall Gardens were designed in 1875 by George Vulliamy
following Bazalgette's embankment grab of 1864. It features London plane trees, lime trees and a variety of shrubs and classic beds all surrounded by impressive railings befitting of Westminster.

A fourth statue, nearer the river was erected in 1929 having been commissioned by the National Union of Seamen to commemorate Samuel Plimsoll (1824-1898), a Victorian politician and social reformer.

He gave his name to the Plimsoll Line (shown on the statue) - a line drawn on ships to indicate the maximum depth to which the vessel may be safely immersed when loaded with cargo. Swiss-born sculptor FV Blundstone is the creator.