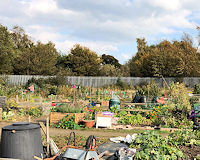 The oldest allotments in London - just!

Description: Northfield Allotments are the oldest existing allotments in London, having been created from common land in 1832.

Originally called Ealing Dean Common Allotments they were created 2 years before Walthamstow Allotments and occupied over twenty acres. Before that the land was also called Jackass Common, after the donkey and pony summer races.

This has been reduced by encroachment over the years.

The remaining allotments are now called an asset of community value by the borough council and designated a Site of Importance for Nature Conservation. This is primarily due to the surrounding 1000 yard hedgerow.

The Birdman of Winchmore Hill», 13.km