Meeting of The Damned 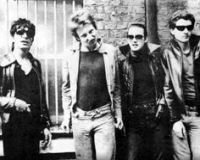 This is where The Damned's Captain Sensible & Rat Scabies met.

Description: The Damned Drummer Rat Scabies (Chris Millar) and Captain Sensible (Ray Burns) met in December 1974 while working at the Croydon Fairfield Hall. Both ended up sacked but their mutual love for music and hijinx had endeared them to each other.

They then played the Halls for the first time in December 2002, 25 years later.

He said: It's been 25 years but I've finally done it. I remember saying to my work mates, One day I'll play on that stage'.

Now I'm going to achieve the goal I set myself so long ago.

The door remains open for Captain Sensible to return to his original job if he wants to: The management at Fairfield said they'd hold the job open for me if the show business thing didn't work out but it has so I won't be cleaning again.

However, I did say I would inspect the toilets on the night of the gig to see if they have kept up the excellent standards of my day!