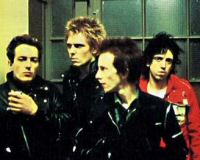 Description: This is where Bernie Rhodes, the first Clash producer had his little basement studio room under what was then the cafe called the Paddington Kitchen. After Bernie advertised in Melody Maker for band members, and Morrissey was one to respond. The Clash thought he couldnt possibly be into rock 'n roll if he was from Manchester!

This is where Topper Headon amongst others were hired from auditions.

Moz and the Suedehead House», 1.7km