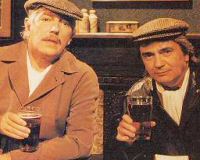 Description: Early in 1962, the Detours, a group of West London teenagers featuring future The Who vocalist Roger Daltrey on lead guitar and trombone, made their debut here at the Sulgrave Boys Club in Shepherds Bush.

It was a popular small theatre for many production companies for example YTV's Rising Damp was first readthrough with Leonard Rossiter here. Peter Cook and Dudley Moore donned their flat caps to first rehearse Not Only But Also here.

School to an Eccentric Comedian», 4.2km