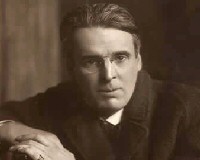 Description: As a young boy William Butler (WB) Yeats came to London with his family. From 1867 to 1874 they lived at number 21, Fitzroy Road in Primrose Hill in a house later occupied by Sylvia Plath.

In 1874 the family moved into 14 Edith Road in West Kensington, where they stayed until 1876 when they moved to Bedford Park in Chiswick.

Later in his life, from 1895-1919, Yeats lived here in number 5, Woburn Walk, near Tavistock Square in Bloomsbury.

Tagholm tells us that the poet kept open house on Monday evenings, and that Ezra Pound, who was a frequent visitor on these occasions would dominate the proceedings, freely handing round Yeats' cigarettes and Chianti.

According to John Masefield, Yeat's sitting-room contained a big, dark blue lectern, on which his Kelmscott Chaucer stood, between enormous candles in big blue wooden sconces.

A member of the Golden Dawn, Yeats also became involved with the Celtic Revival, a movement against the cultural influences of English rule in Ireland during the Victorian period, which sought to promote the spirit of Ireland's native heritage. His writing drew extensively from sources in Irish mythology and folklore.

It was also here where Yeats lost his virginity, at the decidedly late-starterish age of 31. He and Olivia Shakespear had to go to Heal's specially to order a bed before finally consummating the relationship, and he found the experience - that of ordering the bed - deeply traumatic, since every inch added to the expense.