The House by the Thames 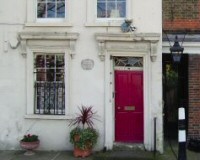 The historic house, oldest on Bankside, and alleged conenctions!

Description: This house is the oldest remaining on Bankside, and the subject of a book by Gillian Tindall. It's had a plaque for a long time now proclaiming that Sir Christopher Wren lived in while building St Pauls.

The house was built about 1710, the year St Paul's was completed, making it unlikely Wren, the cathedral's architect, stayed on the site to watch his masterpiece take shape directly across the river.


The deception may have saved the house from destruction

The plaque probably originally stood on a now-destroyed building a few houses down the river, Tindall speculates, and was put up by Malcolm Munthe, who owned the house in 1945.

Here lived Sir Christopher Wren during the building of St Paul's cathedral, proclaims an ornate ceramic plaque on the house on the south bank of the river Thames.

Here also, in 1502, Catherine Infanta of Castile and Aragon, afterwards first queen of Henry VIII, took shelter on her first landing in London, it adds proudly.