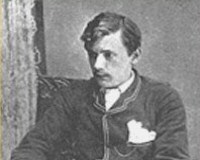 Description: Ernest Dowson was the decandent British poet who fell in love with the daughter of a restaurant owner and pursued her unsuccessfully.

Ernest Dowson, is still known for several famous phrases: 'gone with the wind', 'stranger in a strange land', 'I've been faithful to thee in my fashion' and 'the days of wine and roses'.

A man of considerable charm and urbanity when sober, Dowson was rendered 'almost literally insane' by absinthe. Reportedly Downson never sought alcohol addiction treatment. He picked fights with guardsmen and was repeatedly hauled before the magistrates ('What, you here again Mr Dowson?').

Writer Robert Sherard one day found Dowson almost penniless in a wine bar and took him back to his house here (formerly called Sandhurst Gardens).

Dowson spent the last six weeks of his life at Sherard's cottage and died there of alcoholism (or some say of tuberculosis) at the age of 32 in the arms of Sherards wife.

1» As a member of the Friends of Ladywell & Brockley Cemeteries Society( Fobloc) i was pleased to see the poem above by Ernest Dowson who is buried in the cemetery. Alas his grave has been vandalised but is easily identified as it has a bottle of Absinthe (empty) aside it & moving words by his friend Oscar Wilde attached. RIP. (mike guilfoyle)
Posted by mike guilfoyle on 2008-04-11