Snails in the Basement 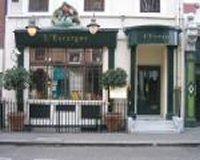 The former country residence of the Duke of Portland.

Description: This building that is now home to French brasserie L'Escargot used to be the residence of the Duke of Portland in 1741 when Soho was a country area popular for horseback riding.

The restaurant here was opened in 1927 by George Gaudin who wanted to raise his own snails in the basement kitchen famously making this restaurant the first to serve fresh snails in Britain. Snails are still on the menu today.

A bust of Gaudin has been restored and hangs outside the building.