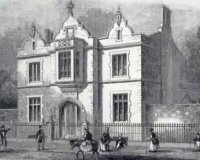 The location of the school Alice Owen set up in 1613.

Description: Few schools owe their origin to a cow, a village maiden and an archer's arrow. The cow was being milked in a field outside the village of Islington in the mid 16th century; the maid, Alice Wilkes - accompanied by a young servant - stopped to watch and try her hand in milking; the arrow from nearby butts, sailed across the field and pierced the crown of her hat, miraculously without injuring her. Much impressed by her providential escape, she vowed that when rich enough she would do something for posterity to mark her gratitude.

Some 50 years later, Alice Wilkes, thrice widowed by a brewer, a mercer and latterly by Judge Thomas Owen, was a lady of considerable wealth. Reminded of her vow by the servant, she established a school here for 30 boy scholars from Islington in 1613. She entrusted the administration of the school and its endowment to the Worshipful Company of Brewers which, for nearly four centuries as Trustees of the Dame Alice Owen Foundation, has supported and encouraged the school.

A girls' school was founded in 1886 and in the late 1960s a search was made for a new location. Eventually a combined school was opened in 1973 on the present site in Potters Bar.

On September 20, 1613, she laid down formal orders for the construction of the school. Dame Alice Owen passed away just 5 weeks later, on October 26, 1613.

Three iron arrows were mounted on one of the school gables as an apt reminder of her narrow escape. And, to this very day, the school newpaper is known as The Arrow.

1» Its a damn shame and a disgrace that the council was able to steal this land from the public and turn it into residences for rich people... (Murray)
Posted by Murray on 2011-05-10