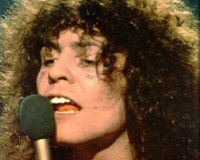 This is where Marc Bolan lived as a teenage rebel.

Description: The son of a Jewish van driver and caretaker, Bolan grew up as Marc Feld here in post-war Hackney in East London with his parents and brother Harry from 1947 to 1962. A plaque marks the house.

At the age of nine, Bolan was given his first guitar and began a skiffle band shortly after. At 14, he was expelled from school. His rebellious streak came out in the wild hair and the often sexual lyrics of the early 1970s star.

As Mark grew up, the front living room was transformed into the boy's bedroom where the brothers spent their time listening to Saturday Night Theatre radio show. A few years later rock'n'roll records replaced BBC radio.