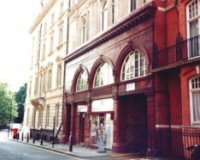 The disused station that is still on the Piccadilly line.

Description: Down Street was a station on the London Underground's Piccadilly Line which opened in 1907 and closed in 1932. During World War II it was used as an air-raid shelter, notably by Winston Churchill and his War Cabinet. Churchill reputedly liked sleeping here during the blitz because it was one of the few places you couldn't hear or feel the bombs.

It's now disused but the entrances and classic tiling can still be viewed. It's now an emergency access point to the tube.

Part of Bond film Die Another Day was filmed here and the 2004 British horror film Creep was set in the Down Street tube station.

1» Some years ago we went on a tour of this station, ending up by our LT guide stopping a through train for us to enter through the drivers cab and alite at a later station. It cost about Â£5 each and was arranged through London Transport. I suppose health and safety has got in the way of such enjoyment now! (Ron)
Posted by Ron on 2009-04-12