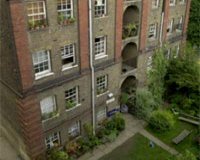 This was where Sid Vicious and Johnny Rotten squatted.

Description: Back in 1975, Sid Viciouss mother, Anne Beverley, gently took her son aside and told him the time had come to fly the nest. I said, its either you or me, and its not going to be me, so you can just f***off, Beverley is quoted as saying in Alan Parkers biography of Sid Vicious, No One Is Innocent. I dont care if you have to sleep on a f***ing park bench.

Fortunately for Vicious, he didnt have to bed down in Hyde Park. Instead, he soon found a squat right here in the rather unlikely setting of Hampstead.

Another temporary resident was John Lydon or Johnny Rotten, as he was known in those days whom Vicious was to join two years later in the Sex Pistols, ensuring a place for the address in punk folklore.

The flat belonged to a woman known only as Barbara, who had a fondness for housing waifs and strays in her spare room, and neglected to charge rent. It had no electricity or hot water, and was in such a poor state that Camden council once declared it unfit for habitation. The flat was A1 squalor, Dave Jones, a roadie, recalls in No One Is Innocent. The sort of place rats are happy to vacate, given the option.

The person I bought my flat from told me Sid and Johnny used to throw kittens out of the window, one resident told The Times. Im told Boy George used to live here, too, and Steve Took from the band T-Rex.

It's rumored Sid scratched his name in the brickwork here and it's still just visible.

Tours: Music: off the beaten path

A Distinctive Tune in Tooting», 8.9km

Moz and the Suedehead House», 4.4km