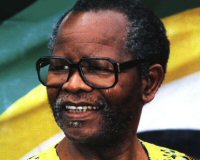 Description: Oliver Tambo, the exiled leader of the African National Congress, who fled to the UK from South Africa in 1960 to run the ANC abroad, was praised by Nelson Mandela as the anti-apartheid icon's closest friend and comrade for over five decades.

For nearly 30 years, this house was the unofficial embassy and headquarters of the ANC in the UK.

It was also home to the Tambos and their three children, as well as countless visitors and those that needed help or missed their homeland.


Embassy of Ecuador and Assange», 6.9km