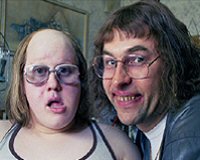 This is where Little Britain's Lou and Andy live.

Description: This is where Lou and Andy's flat was filmed on classic British sketch show Little Britain. Matt Lucas and David Walliams's creations (originally based on Lou Reed and Andy Warhol).

Andy's catchphrases include, Yeah I know, I want that one and Don't like it, while Lou's catchphrase is What a kerfuffle!

Downstairs at the King's Head», 4.7km