Sex Pistol was a Dianetic 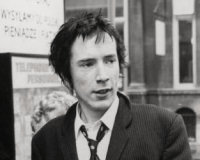 This is where Johnny Rotten worked for the Scientologists.

Description: This is where the Dianetics Information Centre used to be, and in 1975, you might have been coaxed in by none other than Johnny Rotten, singer with a then unknown band called the Sex Pistols.

Nowadays a large number of musicians are fully paid up members of L Ron Hubbards mysterious and much-mocked organisation, from Beck and Isaac Hayes to Elviss widow and daughter. Of course, John Lydon wasnt quite so enamoured.

The Pistols had finished rehearsing one day at their squalid base in Denmark Street and wandered up Tottenham Court Road for a cheap vegetarian curry at a restaurant recommended by manager Malcolm McLaren when they found themselves accosted by Scientologists. For want of anything better to do, they wandered in. According to Glen Matlock's autobiography, I Was A Teenage Sex Pistol, he walked out in disgust after being asked for 10 an hour for sessions where he could learn about his 'emotional problems'.

Apparently Steve Jones and Paul Cook were not quite so cynical; they immediately called McLaren to ask for the money required to set them on the right path. He told them not to be so stupid and hung up.

Characteristically, it was Lydon who turned the situation to his advantage. He somehow managed to convince the Scientologists that he believed their talk of auditing and thetans, and for a couple of days they actually gave him a job, standing on Tottenham Court Road, pushing leaflets on passersby and trying to persuade them to come in and find enlightenment.

Matlock recalls asking him: Don't you think youre exploiting those who are least able to handle it? Lydon's response? It's not my fault if people are stupid.'

Sex Pistol was a Dianetic», 0km

The Elephant and Castle Story», 2.2km