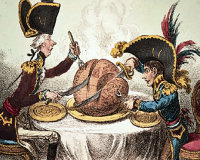 The old Boar's head, a favourite of William Shakespeare.

Description: This is the site of the old Sir John Falstaff pub, demolished towards the end of the twentieth century. That was on the site of the famous pub immortalised in Shakespeare's plays.

The Boar's Head was destroyed in the Fire of London and it's name comes from Henry V's scoundrel friend created by The Bard.

In 1834 Mr. Kempe exhibited to the Society of Antiquaries a carved oak figure of Sir John Falstaff, in the costume of the sixteenth century. This figure had supported an ornamental bracket over one side of the door of the last Boar's Head, a figure of Prince Henry sustaining the other. This figure of Falstaff was the property of a brazer whose ancestors had lived in the same shop in Great Eastcheap ever since the Fire.

He remembered the last great Shakesperian dinner at the Boar's Head, about 1784, when Wilberforce and Pitt were both present; and though there were many wits at table, Pitt, he said, was pronounced the most pleasant and amusing of the guests.

In the month of May, 1718, says Mr. Hotten, in his History of Sign-boards, one James Austin, 'inventor of the Persian ink-powder,' desiring to give his customers a substantial proof of his gratitude, invited them to the 'Boar's Head' to partake of an immense plum pudding this pudding weighed 1,000 pounds a baked pudding of one foot square, and the best piece of an ox roasted.

The principal dish was put in the copper on Monday, May 12, at the 'Red Lion Inn,' by the Mint, in Southwark, and had to boil fourteen days. From there it was to be brought to the 'Swan Tavern,' in Fish Street Hill, accompanied by a band of music, playing 'What lumps of pudding my mother gave me!' One of the instruments was a drum in proportion to the pudding, being 18 feet 2 inches in length, and 4 feet in diameter, which was drawn by 'a device fixed on six asses.'

Finally, the monstrous pudding was to be divided in St. George's Fields; but apparently its smell was too much for the gluttony of the Londoners. The escort was routed, the pudding taken and devoured, and the whole ceremony brought to an end before Mr. Austin had a chance to regale his customers. Puddings seem to have been the forte of this Austin. Twelve or thirteen years before this last pudding he had baked one, for a wager, ten feet deep in the Thames, near Rotherhithe, by enclosing it in a great tin pan, and that in a sack of lime. It was taken up after about two hours and a half, and eaten with great relish, its only fault being that it was somewhat overdone. The bet was for more than 100.

Scandinavian Food for All», 2.7km