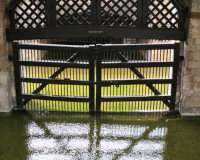 This is the Thames level gate where prisoners would arrive.

Description: This is the Rivers Thames tide hidden entrance that many Tudor prisoners entered the Tower of London through by boat.

The gate was built by Edward I, to provide a water gate entrance to the Tower, part of St. Thomas's Tower, which was designed to provide additional accommodation for the royal family.

In the pool behind Traitors' Gate was an engine that was used for raising water to a cistern on the roof of the White Tower. The engine worked originally by the force of the tide or by horsepower and eventually by steam. In 1724-6 it was adapted to drive machinery for boring gun barrels. It was removed in the 1860s.

The name Traitors' Gate has been used since the early seventeenth century (prior to which it was called simply the Water Gate), prisoners were brought by barge along the Thames, passing under London Bridge, where the heads of recently executed prisoners were displayed on pikes.

According to legend when Princess Elizabeth arrived on Palm Sunday 1554 she refused at first to land at the gate, angrily proclaiming that she was no traitor. A sharp shower of rain however, caused her to change her mind. Later when as Queen she visited the Tower she insisted on passing through Traitors Gate. What was good enough for Elizabeth the Princess is good enough for Elizabeth the Queen, she is supposed to have told the Constable.

Home of the Tichborne Claimant», 4.6km

The Siege of Sidney Street», 1.0km