The Fat Boy of Peckham 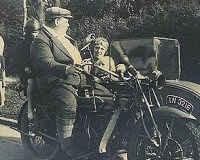 This is where larger than life comedian John Trunley was born.

Description: John Trunley was more than an overweight oddity, he was a colourful character and a celebrity of his time, and when his star waned he served the Peckham community as a tradesman before his early death.

He was born in Colegrove Road on October 14, 1898 and was not exceptionally heavy at birth. He weighed just under 9lbs but it was not long before his extraordinary growth started.

By the time he was seven months he weighed in at two stone and at age six he had ballooned to fourteen stone. Despite extensive testing he flummoxed the finest physicians of the time, as they gave him a clean bill of health despite his size.

John was never embarrassed about his weight and was quoted as saying later in life: People are always saying to me it must be awkward to be fat, but I wouldn't be thin for the world. For though I am 21 stone, I feel as light as a feather really. Anyway if there are any disadvantages to being fat I haven't noticed them. Believe me it is more awkward for other people.

It was also at age six that his stage career faced its first obstacle with the introduction of the Children's Act. He was already well established on the music hall scene topping the bill, earning wages of 80 a week and touring with the ilk of Fred Karno, Charlie Chaplin and Buffalo Bill when the new legislation forced him into the education system.

He attended Reddins School in Peckham and the first problem the school faced was where to sit him. He was so large for his age that he could not fit into the standard school desk, so a purpose built desk had to be constructed for him.

The school were soon to face another problem, notably the other pupils watching him more than the teacher, John later explained: It was destined that I should not stay in that school for long because at the end of the year it was found that all the children were so backward that very few were fit to move up. They had been more intent on my awkwardness than their lessons. So much to my delight, I was asked to leave.

So with a personal tutor in tow, he returned to the stage to so something he loved. Although sitting on stage being gawped at may have seemed abhorrent to others, John Trunley loved the attention that bordered on adulation. He also loved the fact that touring took him round large parts of the country and Europe.

At age 18 his weight had risen to 33 stone, and he was proclaimed to be the heaviest person in Britain.

The commencement of World War I affected John greatly, the regular air-raids led him to develop a nervous disposition and his weight dropped dramatically. By the end of the war he was twelve stone lighter which ultimately left him less popular on the music hall circuit.

However his career took a new direction and he proved to be a hit in silent films. He was viewed as being adept at being able to project mannerisms, he caught the acting bug and it wasn't long before he voiced ambitions to conquer Hollywood.

A stark warning was to follow these from a former blue plaque winner, Charlie Chaplin, who was on good terms with John.

The problem was not that John did not have the talent, Chaplin is rumoured to have said, but the fact that there were already so many fat Americans that it would be almost impossible to get into the market. Maybe times haven't changed that much after all.

John returned to his trade following the dashing of his Hollywood dreams, for a large man he was actually quite adept at the intricate skills of watch and clock repairing and he worked for a large department store for many years.

He left the store eventually and set up his own repair business on Gordon Road.

However he could not stay out of the limelight for long and made a rather audacious public approach to take on Gene Tunney in the boxing ring.

Tunney was a World Heavyweight Champ at the time having defeated the all American hero Jack Dempsey twice. But John was serious in his request and was seriously disappointed that his request was not answered as he said he found worthwhile opponent hard to come by in England.

Just as the First World War saw John encounter serious health problems, the same happened at the start of the Second World War, but this time he would not recover. The nights in air-raid shelters saw him catch pneumonia and once again his weight dropped.

On exiting a shelter on September 30, 1944 he collapsed and was rushed to hospital where he later died from pulmonary tuberculosis.

The attendance at his funeral was said to be in its hundreds which ultimately showed that although the life of John was weird and wonderful, he was much loved. He is buried in Camberwell New Cemetery. 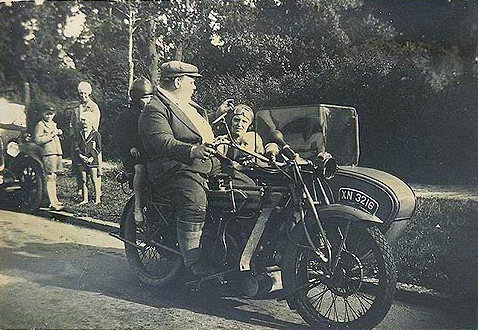 1» I hugely appreciated your piece on The Fat Boy of Peckham. This was a term of playful endearment that my father used to refer to me as a child - ironic because I was neither fat nor from Peckham. My father, who died three years ago at the age of 100, had come to England from Lithuania in 1920 and lived his teenage years in the East End, no doubt seeing John Trunleys name at the top of music hall bills. I dont know if my father ever saw The Fat Boy in person, but he obviously made a great impression on him, which he passed on to his family with his Fat Boy banter. It was extremely interesting to read your brief biography, which evoked both a past age and warm memories of my late father. As a post script I might add that as a GP my father attended to another famous fat man of British entertainment, Fred Emney. (Jonny Stoll)
Posted by Jonny Stoll on 2010-07-20