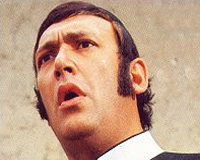 This is where giant comedy legend Bernard Bresslaw passed away.

Description: Tall actor Bernard Bresslaw from The Army Game and Carry On films collapsed and died here (11th June 1993) in his dressing room where he was about to play Grumio in the New Shakespeare Company's production of Taming of the Shrew.

It happened the day after the death of fellow comedy performer Les Dawson.

1» Hi, I had the greatest pleasure of interviewing him when he was in the New Theatre,Cardiff,for Radio Glamorgan,a hospital radio station where I once was a presenter. I still cherish the tape, he was such a gentleman,and a tall one too. Very sadly missed. I am wondering weather anyone knows when he appeared in the New Theatre, Cardiff, as I havnt got a date,but I do have his autograph as well. ..xxxx (Stephen Tatnell)
Posted by Stephen Tatnell on 2009-11-21