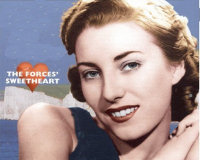 Description: Dame Vera Lynn was born Vera Welch on 20 March 1917, here in Thackeray Road, East Ham. She was singing in Working Mans Clubs at the age of seven, and joined a dancing troupe when she was 15. Her first broadcast was in 1935, singing with the Joe Loss Orchestra. She was mostly known for her huge wartime nostalgic hits like The White Cliffs of Dover. She was known as The Forces Sweetheart.