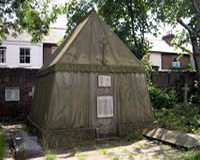 The brilliant Bedouin mausoleum for Richard Burton and wife.

Description: When maverick explorer Sir Richard Burton died in 1890, Isabel built this splendid Bedouin-style mausoleum and paid for the stained glass Memorial Window in the church.

Richard Burton lived from 1821-1890, at a time in history when exploration and scientific knowledge were advancing at a gallop. Full of the spirit of the age, Burton possessed a passionate curiosity about life in the little known Arab world and he persuaded the Royal Geographical Society in London to fund a series of adventures. He was a brilliant linguist, utterly fearless and a master of disguise, and so was able to penetrate the cities of Medina and Mecca. He secretly drew plans of the Great Mosque and its sacred inner shrine, the Kaaba, at Mecca.

Inspired by his part as an Arab pilgrim he then went to Harar, which was totally forbidden to non-Moslems, and made notes about the East African slave trade.

His notebooks were crammed with information, geographical, commercial and anthropological. His travel books were a literary success in London and the Royal Geographical Society agreed to fund the next expedition - to find the source of the White Nile. He set of with John Hanning Speke but the two explorers fell out at Lake Tanganyika. Their dispute over the source caused a furore at the Royal Geographical Society which only ended with the sudden death of Speke in 1864.

Being the British Consul in Fernando Po, West Africa, Santos, Brazil, Damascus and Trieste gave him time to explore and write. He married his Catholic wife, Isabel Arundell, in 1861. She was completely devoted to him, and tried to keep up with his rackety life, obeying his instructions to pay, pack and follow, as he moved around the world. The Burtons were happy in Damascus, where they mixed easily with Arabs and Christians, but were eventually expelled for their over-enthusiastic involvement in local politics.

His last Consulate was at Trieste, where he spent his last years quietly with Isabel. It was at this time that he privately published his translations from Arabic of the Karma Sutra and The Arabian Nights. He published 27 books in his lifetime.

There is a ladder at the rear of the tomb which ascends so you can see the coffins inside.

The Thames Valley Times described in its edition of 17th June:

It is a reproduction in stone of the semblance of an Arab tent. It stands on a bed of concrete, and above that a square of rough-hewn York-stone some 12ft. by 11ft. The tent itself, sloping inwards a few degrees on all sides, is composed of Forest of Dean stone. Throughout, the slabs are carved to represent the natural irregularities of surface of a tent, and the joinings are made neatly at the places where ropes are represented as binding the whole to the ground. The design would not allow tent-pegs being introduced, but otherwise the appearance of a tent is well maintained. The door, also a solid slab of stone, is carved to represent a drop-curtain, and moves on flanges of gun-metal. From the top of the elevation other slabs of stone form a roof which meets at an apex above which is a gilt Star of Bethlehem. Below, but at the top of the front elevation, is a well-executed crucifix, in white marble with I.N.R.I. at the head, and the crown of thorns at the foot. From the foot of the cross extend on each of the sides a row of gilt crescents. As originally designed the crescents would have been above cross and below the star, but the Catholic hierarchy placed a veto upon a Christian emblem occupying a sub-ordinate relation to the most important of the Moslem insignia. It must be added also that from the standpoint of artistic effort the crescents look striking here as they could be made to do elsewhere. On the upper part of the stone door is a carved marble Book of Life giving Burtons details. The mausoleum is lighted from the back by a small, wire-protected, stained glass window, with the single figure of a dove descending with outspread wings. Within, the Oriental style of the fabric is maintained by a number of beautiful lamps, brought over by Lady Burton from Trieste, suspended from the ceiling and shed a dim religious light through jewel-shaped facets of coloured glass each no bigger than the Koh-i-Noor diamond. Two Eastern lamps were also on the marble altar at the end, opposite the entrance door, the pillars being finely-moulded bronze serpents. and the shape, together with the suspended lamps. That of one side of a pair of small beam scales. Huge candles of graduated heights, in massive silver sticks, were also here for the occasion. On a three-cornered marble shelf at the right-had side was a curiously wrought vessel, with iron frame, to contain the holy water. The floor is of white Carrara marble, beautifully veined, and on each side are marble bearers about 6 inches high, for the coffins of Sir Richard and eventually of Lady BurtonThe mausoleum itselfhas cost 460, but the incidental and other expenses will no doubt run to double that sum.