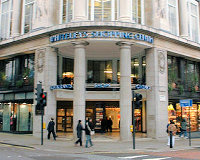 The first ever department store in Britain.

Description: This shiny bright department store was Britains first EVER department store which opened very grandly in 1912, five years after the murder of William Whiteley, the self-made entrepreneur behind the scheme.

Gordon Selfridge founder of Selfridges bought it in 1927 and it continued to flourish until World War II. It finally closed down in 1981, before a grand reopening in 1989.

It's now magnificent colonnade faade dominates Queensway and has revived the Bayswater area. Inside the marble La Scala staircase is the centrepiece of the main atrium, lined with a fantastic array of boutiques and shops.

There used to be a rooftop golf course (now a carpark). Upstairs theres a TV studio where Channel 5s The Wright Stuff is filmed.

The murder of William Whiteley, founder of Whiteleys shocked Britain on 24th January 1907. This iconic larger-than-life character started his business with just one small shop and went on to manage an empire covering fourteen acres and employing 6,000 people.

He was gunned down in his shop here by Horace George Rayner, a young man claiming to be his illegitimate son, and secrets emerged which Mr Whiteley would much rather have remained hidden.

Staff purportedly heard raised voices coming from William Whiteley's office. Is that your final word? asked one voice, Yes' came the reply. Then you are a dead man said the first voice and three shots rang out. The first two killed Whiteley and the third was an unsuccessful suicide attempt.

He was sentenced to death by jury, but there was a public outcry and a massive petition, and he served 12 years in prison instead, being released in 1919.

The Year Round Christmas Shop», 4.5km