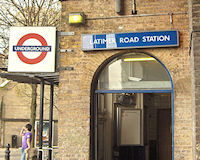 The source of the so-called 1958 Notting Hill 'race riots'.

Description: It is popularly believed that the Notting Hill race riots began here on the night of Saturday August 20th when a 400-strong crowd of white men, many of them Teds, attacked houses occupied by West Indians.

Among the victims was Majbritt Morrison, a young white Swedish bride of a Jamaican. She was pelted with stones, glass and wood, and struck in the back with an iron bar as she tried to get home.

The internal police witness statements provide graphic evidence of the motives of the mobs - at one point crowds several thousand strong roamed the streets of Notting Hill, breaking into homes and attacking any West Indian they could find.

The real cause and course of events is disputed now, and the modern day carnival is a spin-off from a fund-raising scheme for youths arrested in the riots.