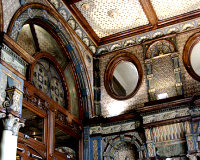 This bank has a strange history involving women in the basement!

Description: This branch of Lloyds (Law Courts branch) had a fabulous decor which takes you straight back to when it was opened as a restaurant in 1883 to serve legal folk.

It only lasted 3 years but it was one of the first air-conditioned establishment's in London. A pair of women would ride a tandem bicycle in the basement which would power a giant pair of bellows forcing air into the ground floor dining area - hats off to those girls!

The bicycle is still here to see.

1» Thank you very much for a very interesting story. Today I asked Lloyds to see the bicycle, but they said they had no more. Where can I see it? (Kenji)
Posted by Kenji on 2011-03-17