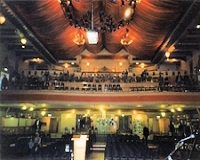 The old Ealing Odeon was where Setanta broadcaster was born.

Description: It was here that struggling sports broadcaster Setanta started life in what used to be an Irish dance hall.

They were showing the Republic of Ireland's 1990 World Cup game against Holland after the BBC and ITV declined to broadcast the game in the UK.

It cost just 10 admission to watch that game in Ealing's Top Hat club and Setanta's two Irish founders, Michael O'Rourke and Leonard Ryan, managed to break even after 1,000 Irish fans turned up to watch the game.

Nineteen years later, Setanta was a company transformed. It had expanded gradually at first, and then grown in a spurt from 2004 onwards - which saw it acquire major sporting rights not only for football tournaments, but golf, horse racing, rugby union, cricket and boxing.

Along the way it changed itself from a niche broadcaster providing Irish and Gaelic sport to an expatriate audience, complete with homely Dublin guesthouse advertisements, to a rival for Sky whenever major sports rights came up for grabs.

The Top Hat Club closed in 1994, and the Grad 2 Listed Building is now owned by Elim Penticostal Church.

It used to be Ealing's Odeon cinema, and opened in 1932. It had an unusual Spanish theme to it's interior. It closed as a cinema in on 17th January 1985 with Arnold Schwarzenegger starring in the aptly named The Terminator.