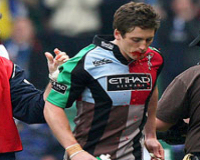 This is where the blood used in th rugby blood scandal was sold.

Dean Richards, the disgraced former Harlequins director of rugby, ordered club physio Steph Brennan to buy a packet of blood capsules from a Clapham joke shop to enable players to fake injuries, setting in motion a series of disastrous events that have ruined the club's image and his own career, the hearing in September 2009 was told.

The Lord Derby and Football», 10.km

Superhoops in the Bush», 4.2km