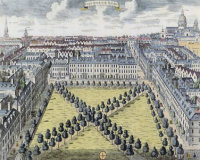 This is a historic complex of buildings dating back to 1300's

Description: After the Black Death in 1348, Walter de Manny, one of Edward III's favourite Knights, bought land here for a burial ground. Later, in 1370, he founded the Carthusian monastery. This was an enclosed order, where the monks lived in cells and only talked on Sunday afternoons.

In 1536, Henry VIII dissolved the monasteries, and approached Prior Houghton of Charterhouse for his approval of Henry as head of the Church of England. When Prior Houghton refused, he and 10 of his monks were hanged, drawn and quartered Prior Houghton and pour encourager les autres.

In 1611, the site was acquired by Thomas Sutton, the richest Commoner, who left money for a school and almshouses. Charterhouse School moved to Godalming in Surrey in 1872, but the almshouses remain today, and provide board and lodging for 40 impoverished men.

Although heavily restored, much of the ancient structure remains. The chapel and gatewaydate from the 14th - 17th century. The stones of Edward de Manny's tomb can be seen behind the railings in front of the chapel.

In January 2017 the Charterhouse opened its doors to the public for the first time since its foundation as brand new London museum.