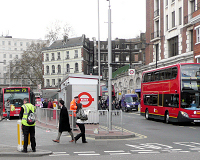 The last suicide burial at a crossroads in England.

Crossroad burial was officially abolished by Act of Parliament in 1823 after opposition to the practice was encouraged when George IV's carriage was held up by a crowd of spectators here on this spot.

They were watching the burial at this crossroads with Lower Grosvenor Place and Grosvenor Place of a suicide called Abel Griffiths. It's now the entrance to the bus station at Victoria Station.

Suicide was becoming regarded with much greater sympathy at this point, while population growth and the development of transport meant that rural crossroads no longer seemed so remote. For a period following abolition, however, suicides could only be buried in graveyards between 9pm and midnight, and no ceremonies were allowed.

This is known as the last crossroads suicide burial in Britain, although it's probably merely the last high profile burial.