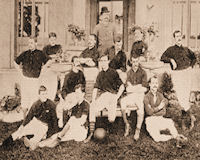 The site of Arsenal FC's first ever ground.

Description: The Invicta Ground was a football stadium , that was the home of Royal Arsenal (today known simply as Arsenal) between 1890 and 1893.

It's the first proper home of Arsenal having had a stand, a row of terracing and changing rooms. They attracted upwards of 1000 spectators in their first year and eventually up to 12000 in 1891 against the Scottish Cup holders Hearts.

The ground's owner, Mineral Water mogul George Weaver, almost doubled Arsenal's rent after their successful year. They decided not to stay and George never found new tenants so he sold the land for housing.

Arsenal returned to the Manor Ground, which they bought outright after a share issue, and spent the summer of 1893 building proper stands and facilities.

Some of the gardens here still feature concrete from the old terraces.

Tours: An Arsenal Tour of London