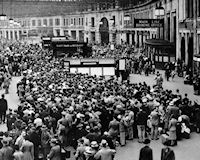 This is one of the locations for The Bourne Ultimatum.

Description: London's Waterloo Railway Station sees more passengers than any other station in the United Kingdom. It dates from 1922 and is partly Grade II listed, but there has been a station here since 1848.

One of the stations top features is the Victory Arch, built of Portland Stone, at it's Northern entrance. It commemorates the London and South Western and the Southern Railway men who gave their lives in the First and Second World Wars.

The station has featured in TV and films such as The Bourne Ultimatum, Incendiary, London to Brighton, The Russian Dolls, Franklyn, Waking the Dead, The Commander, Spooks, The Apprentice, The Bill, Top Gear, and Only Fools and Horses.